SPIF in 2023 The next online meeting of SPIF will be on 13th February 2023 and here is the Agenda.   The topic is ‘FoI Reform in Scotland – Designation of Public Service Providers’.  Registration is free at https://www.eventbrite.co.uk/e/reforming-foisa-designation-of-public-service-providers-tickets-520376539237

Join us at SPIF The next online meeting of SPIF is on Friday 9th December from 10-12 noon and will focus on the current FoI reform consultation by Katy Clark MSP and the one recently issued by the Scottish Government.  The Agenda is available and register for a free place at Eventbrite

This meeting is part of the annual global celebrations for International Human Rights Day on 10th December.  The  focus is on how FoI legal reform can strengthen ‘the right to form an opinion by receiving and imparting information and ideas’ as set out in Article 10 of the European Convention on Human Rights and other UN human rights treaties which have been ratified by the UK Government. Access to information is an important human right, and a gateway to enjoy all other human rights.   The right to information as an essential tool for transparent and accountable government and enables public involvement in formulating policy and in the decision-making processes of governance.

The Minutes of the meeting held on 28th September 2022 appear HERE.   Any queries please contact us at info@cfois.sco

SPIF 28th September 2022 at 2pm The next online meeting of the Scottish Public Information Forum (SPIF) celebrates International Right to Know Day on 28th September.  The date is marked by civil society advocates globally.    It is 20 years since IRKD was established by a group of civil society in Sofia, Bulgaria.  It has since become a truly global day and marked around the world by different events. The annual global celebrations for UNESCO’s ‘International Day for Universal Access to Information’  coincide which aims to spread awareness of the need to expand laws related to information and their actual implementation. The expansion of these laws helps in building inclusive institutions access the world. The theme of UNESCO’s Global Conference on Universal Access to Information 2022 is Artificial Intelligence, e-Governance and Access to Information. 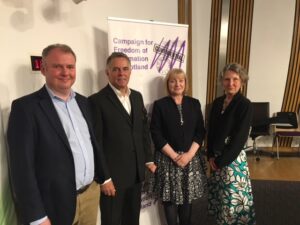 The last meeting of SPIF was on 28th February 2022.  It focused on the CFoIS draft Bill to reform FoISA and a report of proceedings has been made by the Scottish Information Commissioner’s office which is available HERE.   The Bill offers 21 amendments to address evidenced problems and includes proposals from the post legislative scrutiny report published by the Scottish Parliament in May 2020.  Contributors gave examples of further reforms that could be included when the Bill is discussed by the Scottish Parliament.

The Minute of the meeting of 28th September 2021 appears HERE . You can access a note of the presentation HERE on  COP26.  The meeting celebrated  International Right to Know Day.

Transparency and Business  A sub group of SPIF has been established to focus on the UN’s 31 Guiding Principles on Business and Human Rights and what impact they have made in Scotland and the UK.  It will link this global initiative to delivering openness and scrutiny in the spend of public money, particularly in public procurement.  A short background paper is HERE.which

June SPIF The Minute of the June meeting is HERE.The date was chosen to mark the fourth anniversary of a motion at the Scottish Parliament – on 21st June 2017.  MSPs voted  unanimously to require post legislative scrutiny of  the Freedom of Information (Scotland) Act 2002 (FoISA) and for practice reform.  Despite the vote, it is unlikely that the detail and extent of legislative reform will be agreed until 2023.

May SPIF The Minute of the meeting of SPIF 24th May 2021 appears here.

March SPIF The Minutes of the last meeting appear here.  The keynote speaker was Helen Darbishire from Access Info Europe, a member of the Steering Committee of the OGP and Chair of the UNCAC Coalition, the network that coordinates civil society activity in monitoring and promoting the UN Convention against Corruption.  Doreen Grove, Open Government Partnership Lead, at the Scottish Government Strategy Unit also spoke.

Thanks CFoIS thanks the Andrew Wainright Reform Trust for providing funding to make these meetings  happen and to enable other project work.

About SPIF SPIF brings together rights holders, duty bearers, government, the Scottish Information Commissioner and the public around a table twice a year to discuss, equally, the practical enjoyment of access to information rights in Scotland.  Learning from each other helps improve understanding and practice across and within sectors.

CFoIS continues to organise SPIF in the public interest, to collaborate and be an asset in the development, delivery and continuous improvement of access to information rights.

CFoIS depends on donations to keep going.  Your support helps deliver change that shifts the system.  Your donation enables us improve and defend the Freedom of Information (Scotland) Act 2002, promote the right to information across a range of laws and improve transparency and accountability in publicly funded services.